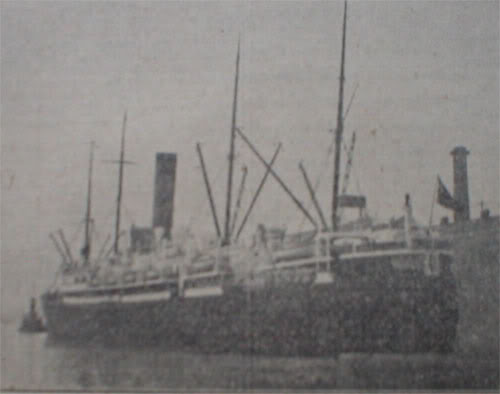 Loss of the YORKSHIRE and the CITY OF MANDALAY

Survivors from two British ships sunk have been rescued in the Atlantic by a U.S Steamer. The ships are the Bibby Line YORKSHIRE and the CITY OF MANDALAY, both commanded by Bebington men.

The U.S Steamer INDEPENDENCE HALL, 5,050 tons, yesterday rescued the survivors from the two British ships. On her way from New York to France she first wirelessed her owners the United States Maritime Commission, that she had picked up survivors from the Ellerman Line vessel, CITY OF MANDALAY, 7,028 tons

The Commission then announced she had on board, 300 survivors of THE CITY OF MANDALAY and the YORKSHIRE.

A radio message from the INDEPENDENCE HALL said she had rescued 223 survivors of the YORKSHIRE.

Two Merseyside Captains are among the survivors of the two vessels, the Capt of the YORKSHIRE, Capt SMALLEY of Brakenwood Rd, Higher Tranmere and of the CITY OF MANDALAY, Capt A. G. MELVILLE, aged 56, of Heswall Ave, Higher Bebington, who had been with the Ellerman Line since 1915, appointed to his first command 10yrs ago and to the CITY OF MANDALAY, a year ago. He was torpedoed during the last war while serving on the CITY OF GLASGOW which sank in 1918.

The YORKSHIRE a twin screw turbine driven vessel 10,183 tons gross, 6,254 net, 482ft length, was built at Belfast by Messers HARLAND and WOLFF and completed in 1920, and has been in regular cargo and passenger service for Messers BIBBY Bros, between the Mersey and Ceylon and Rangoon.

The CITY OF MANDALAY was sunk with 60 on board, 443 ft long, 7,038 tons, built in 1925 at Newcastle by SWAN HUNTER and WIGHAM RICHARDSON, registered at Glasgow.

MANY MISSING FROM THE YORKSHIRE

Tributes to the bravery of officers of the Bibby Liner YORKSHIRE and the Ellerman ship CITY OF MANDALAY are paid by passengers aboard the rescue ship INDEPENDENCE HALL which landed, 299 passengers at Bordeaux.

58 passengers are missing from the YORKSHIRE including the Capt a Wallasey man. An officer of the YORKSHIRE, seriously wounded, coolly gave orders to abandon ship and remained at his post with other members of the crew who perished.

Poignant stories told by a Britsh soldier two Americans on board the rescue vessel.

61 passengers of the YORKSHIRE are missing, 7 from the CITY OF MANDALAY. 9 people who were rescued are injured , one seriously. One died and was buried at sea.

Mr Jack THOMAS, Cinema Actor from Hollywood, said, "On Tuesday we were off the coast of Portugal when the steamer received an, S.O.S, from the YORKSHIRE, which had just been sunk by a German sub.

The INDEPENDENCE HALL, en route at 4pm, received a second message from the CITY OF MANDALAY announcing she was also sinking. When we approached her we saw the doomed steamer sink into the sea, four small boats were packed to breaking point with people.

"Men were swimming, children crying, two lifeboats were filled with water barely able to keep afloat. An expectant mother was rescued, her husband drowned. A weeping mother, who was inconsolable, sought her missing children.

A man hoisted himself aboard carefully holding a tiny bundle, containing his 6mth old baby, its mother was lost. The officers of the British ships were sublime. Only two escaped the rest went down with their ships. With blood running down his face and severely injured, the 2nd Officer of the YORKSHIRE, coolly gave orders to abandon ship. He continued at his post with the other crew members who perished.

The cabins were given over to the rescued women and we slept on deck.

The ships were bringing convalescent soldiers to Britian."

A British soldier, a survivor, gave a graphic story how his ship was chased by a German U-Boat, "Four hours we had been standing by, our life belts tied on and we were assembled on deck. Suddenly a siren sounded the alarm, a sub was chasing us.

We stopped when the first shot was fired, and the lifeboats were launched. Some men jumped in the water. Already the vessel developed a list, and began to sink.

â€œI jumped over board, around me men were swimming, while the lifeboats were rowed away as fast as possible away from the sinking ship."

Another survivor told how the submarine submerged, while the INDEPENDENCE HALL was picking up people from the life boats.

As the INDEPENDENCE HALL approached land the sound of massed voices singing, "God save the King," and the American National anthem could be heard. Waiting in the quay were the British and American Consuls.

58 persons missing from the YORKSHIRE:-

There were 278 persons on board the YORKSHIRE, Messers BIBBY and Co, the owners have received a telegram from Bordeaux stating 58 persons are missing.

Capt SMALLEY lived with his wife and two daughters at 22 Bromley Rd, Wallasey. He was in his early forties. He had served his apprenticeship in sailing ships and for more than 16yrs had been with the Bibby Line, appointed to command of the YORKSHIRE 2yrs ago, and was previously Chief Officer of the LANCASHIRE. At present his wife and family are staying with relatives at Caernarvon.

Mr John W. HUMPHREYS, Chief Engineer of the CITY OF MANDALAY who lost his life when the steamer sank, lived at Brentwood, Caernarvon and for many years previous at Llandwrog near Caernarvon, he leaves a widow and one daughter.

DEAD AND WOUNDED FROM ANOTHER SHIP

Three wounded passengers, five dead people and 16 Lascars were landed at an English port on Saturday, a survivor told a thrilling story.

The vessel was on her way to England during pitch darkness, she was a few hundred yards away from the YORKSHIRE when she was attacked by a U-Boat.

Walter ANDREWS, 12 Liverpool St, Dover, a passenger who arrived at port with other crew members on a British Destroyer, stated they had been followed by a U-Boat for some time, the explosion on the YORKSHIRE caused a sheet of flame to go skyward.

I then saw a U-Boat signal to our ship, "˜Stop or I will sink you." I have served for 7yrs in the Corps of Signallers in India, and interpreted the signal given by the U-Boat. There was a cry, "Abandon ship" and the small boats were lowered. I, and 4 Lascars got into a boat, I saw my wife Lucy, on the deck and called to her to jump.

At that moment the small boat was swept towards the stern of the ship and was hit be the propeller which was moving. I was swept into the water and struck my head. I lost conciosness but regained my senses when I came to the surface.

The small boat was water logged, search, lights swept the sea and I was rescued after some time. In the meantime my wife had been rescued but, had injured her leg on jumping into the sea. She and another English woman were taken to hospital by ambulance when they got off the destroyer.

5 dead were removed from the destroyer in coffins, 4 Lascars and an English woman belonging to Torquay.