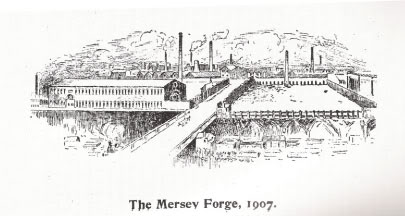 The workshops of Liverpool 1

The great Mersey Forge is a credit to Liverpool. These celebrated works are situated immediately by the river whence they derive their name, in a portion of the ground that originally formed the royal demesne of Toxteth Park and have a part of the Harrington Dock and some of the long timber quays in front. The situation is one of the greatest advantage, as to the rear there is a high level roadway by which materials can be conveyed without going all around the body of the concern, whilst directly in front is the low level of the public quay or Sefton St.

The Lower or old works contain 14 immense furnaces, which would be considered wonders in any other part of the world, with 9 large hammers and steam engines in great variety. Most were at work still there was not the slightest approach to bustle, hurry or disorder, everything seemed to be done with the greatest ease and regularity. The most remarkable feature of the premises is the absence of the crowded character of a workshop, or confined and close atmosphere of a vulcanic region, as one would expect where such weighty works are being turned out every moment.

The fires of the numerous furnaces are blazing and steam rising on all sides, but every portion of the concern is well ventilated and business performed steady and quickly.

There are bars of rod iron, long and red hot, drawn out like burning serpents and sent back again to go through some further cleansing operation in order to free them or fling off the earthy flakes or particles which may have adhered to them. Boys are seen here and there like juvenile vulcans, apprentices of course assisting in the glowing services required of them, while the men are passing from one to the other, or one piece of mechanism to the other, the burning lumps and bars trailing along the ground, fixing them into position for greater refinement.

The forge hammer - a colossal instrument is made up of the helve, the anvil, the standards, the calm and shaft, and the bray, while the gagger is called into requisition when necessary to stop the motion. The blow of this ponderous weapon is tremendous, yet it occurs every moment again with the most apparent unconcern. But the workmen are all minding what they are about, since they might otherwise be visited with startling flapper from an ugly customer in the way of business. These men seem sharp, active and intelligent fellows, wide awake to every occurrence and motion and skilful to avoid every incident.

The helve is a gigantic casting set upon two standards, and worked up by a cam, which transmits the motion to the helve through a strong bar of wrought iron. But the greatest curiosity of the premises is the splendid fly-wheel which no doubt is the pride of the establishment, as it is perhaps the largest wheel of its kind in the world. The diameter of the wheel is 35ft and it weighs 60 tons. It is well fixed on the crank shaft of the engine of 80 hp. The rim alone has in cross section 144 sq inches, the bearings 18 inches in diameter and are mounted in friction rollers, according to the plan of Mr William Clay the manager, who is the animating life and soul of the whole concern. So smooth and silently, so quick and gracefully does the wheel make its revolutions, that the unconscious visitor has not the slightest notion the 60 tons of metal are travelling before him at a 4,000 ft per minute. More than one third of the weight is concerned in the rim alone, which, is made to revolve with a velocity of 4,500 ft per minute at about 38 revolutions A short paper on the beautiful and ponderous piece of mechanism was read by the manager Mr Clay before the British Association, last September when they held their sitting in Liverpool. He found that in rolling boiler plates there was a certain limit to the speed at which the roller could travel, it was therefore imperative in a direct acting engine to obtain a wheel of sufficient size and weight to overcome the ordinary shocks of rolling large plates of iron. The creation of this great machine was accordingly made and got up, the wonder of the workshop, one of the most beautiful pieces of mechanism without question.

The assemblage of the heaps of bits of scrap of every kind of old iron - the rag fair of the Mersey concern is a curiosity in itself. Here tons and tons of old iron are seen to be broken up and thrown in the furnace to abide the issue of another trial, and to be regenerated, thrown in the mould again as fresh as ever. In close proximity to the huge mass of rusty old materials are two powerful pairs of shears, worked by an engine which consists of two cylinders of several inches in diameter and two feet stroke. It is 20 hp but there appears to be another of much greater weight, one of 100 hp which does infinitively more execution. The smaller pair of shears can cut bars of iron of 2 inches, while the larger can dispose of pieces of iron 4 or 5 inches in diameter and sever them in an instant.

The flame and smoke of the different furnaces are led into two flues of 2 ft in diameter, which runs through a vertical boiler 6 ft in diameter and 35 ft high, which is made to ascend through the roof of the building. There are various boilers and each has a feeding or donkey engine attached to it. The puddling furnaces for pig-iron are accommodated with cinder bottoms, while the scrap iron is provided with bottoms of sand. Several kinds of iron are melted together and run into sheets 10 ft in length by 18 inches in breadth.

About 10 yrs ago in 1845 a great gun of immense calibre was forged here for the United States, Steam Frigate, PRINCETON, the length from breech to muzzle was 12 ft and the diameter 12 inches. The weight of shot 219 lbs. These works are known to supply articles to establishments all over the world to foundries , mills, steam vessels and railways, wherever, great skill and scientific ingenuity are called for, the Mersey Iron Forge seems to the very workshop above all others.

Above the works in a large detached building apart from the working premises are lofty and well ventilated stables, accommodation for 2 dozen horses. The staff is said to consist of over a score of strong comely dray horses, which are the admiration of the town, and kept in constant employment. The mere appearance of the place speaks highly in favour of the judgement and care of the superintendent, who was placed in his present position by Mr W. J. Horsfall one of the principal proprietors. He was Staff Sergeant at the Royal Artillery in the regular service and employment at Manchester when he obtained the proprietors notice.

There is something still better attached to the Mersey Iron Works, a handsome and commodious reading and newsroom, furnished in a comfortable and elegant manner. The workmen are kept constantly supplied with periodicals of the town, metropolis and towns of the provinces. The proprietors appear to have missed nothing for the comfort, entertainment and amusement of the work people after their hours of labour have passed. A benefit society has been for many years attached to the concern from which the many mechanics and workmen derived at the close of last year a drawback of 75% of their deposits, besides the annual festival and dinner, with the princely proprietor Mr W. J. Horsfall himself acting as president.