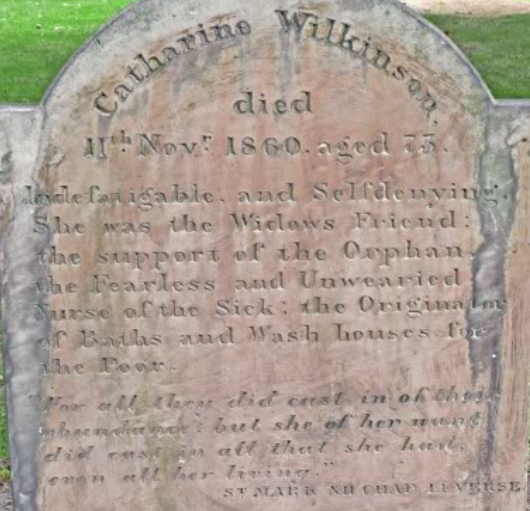 The grave of Kitty Wilkinson at St James Cemetery

A recommendation to appoint Thomas WILKINSON as superintendent and Catherine his wife as matron of the baths in Frederick St, in lieu of Mr and Mrs CLARKE, who have been appointed to the new baths in Paul St

Origin of the Liverpool Baths and Washhouses, the first in England

A subscription has been collected of £267 to reward the services of Catherine WILKINSON the originator of these institutions, which are now so widely disseminated, and are which at this moment under this admirable woman’s superintendence, of such avail as counteracting the dreadful effects of fever and contagion, from which Liverpool is suffering. On Monday last a small fete in honour of her was given in the grounds Mossley Hill, near Liverpool. The children of those who were interested for her and her own humble friends, formed a gay and happy concourse, and a fine china tea set, silver teapot and cream jug etc, were presented to her by three daughters of the Rev C. W. LAWRENCE. The teapot bore the inscription, Presented by the Queen, the Queen Dowager, and the Ladies of Liverpool to Catherine WILKINSON, “Thy shalt love thy neighbour as thyself.”

The Mayor’s communications, a memorial was read by Catherine WILKINSON, requesting to be allowed to continue as the superintendent of Frederick St, Baths, vacant by the death of her husband with the assistance of her son.

The Queen and Catherine WILKINSON

We have great pleasure in announcing that the Queen has been graciously pleased to give £50 out of the Royal Bounty to Catherine WILKINSON of this town to whom the public are indebted for the establishment of baths and washhouses for the poor. This well deserved acknowledgment of the services of a humble individual may be taken as her Majesty’s sense of the value of these noble institutions with which the name of Catherine WILKINSON will be for ever associated, and as an encouragement for those who, by active kindness and an embeligent use of the limited means within their reach, seek to improve the conditions of persons in their own class of life, a task of which their intimate knowledge of the wants and capabilities of their neighbours renders them peculiarly fitted. It must be gratifying to the people of this country to know that. They are blessed with a sovereign , who amidst the various and great anxieties of the present crisis, can yet find time to take an interest in what concerns the welfare of her subjects, however humble the class, and to express in a substantial manner her approbation of individual self sacrifice and enlightened philanthropy in the most lowly station of life. 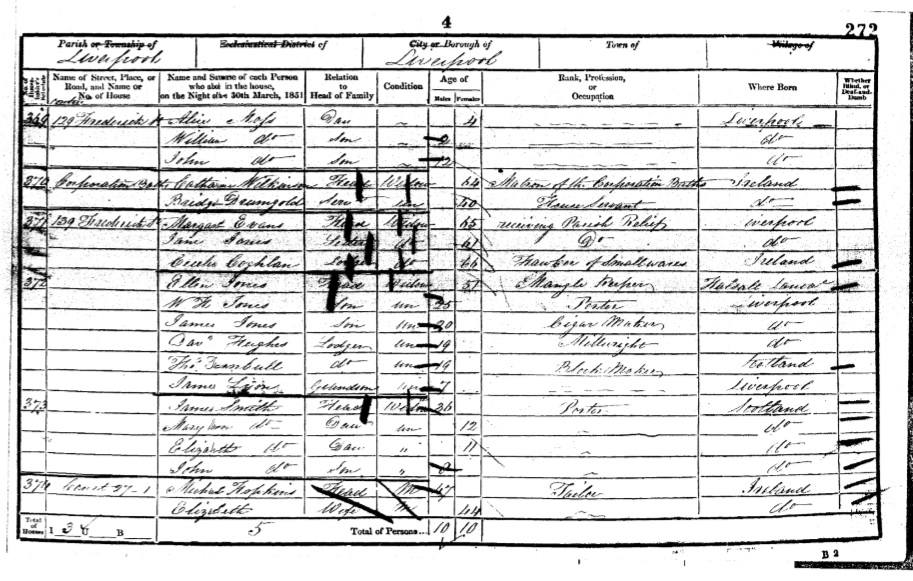 Report of the establishment and present condition of the Public-baths and Wash-houses in Liverpool by Mr James NEWLANDS, Borough Engineer, Liverpool, the origins of these establishments :-

In 1832, when the cholera ravaged the town, the necessity for cleanliness as a means of arresting, or abating the plague became apparent, but poor families, huddled healthy and sick together, often in a single apartment, and that an under ground cellar, had not the means of personal cleanliness, and still less for washing their clothes and bedding, and thus nothing could be done by them to prevent the spreading of the infection. It was left for one of their own class and station,. Mrs Catherine WILKINSON of Frederick St, Liverpool, to provide a remedy. She, the wife of a labourer, living in one of the worst and most crowded streets in the town, allowed her poorer neighbours, destitute of the means of heating water, to wash their clothes in the back kitchen of her humble abode, and to dry them in the covered passage and back yard belonging to it. Aided by the District Provident Society, and some benevolent ladies, this courageous and self-denying woman contrived to provide for the washing of, on an average, 85 families per week. This begun during the visitation of the cholera, she continued for several years, the poor people contributing 1d per week to assist in defraying the expenses.

The great supporters of Mrs WILKINSON in her praiseworthy efforts were Mr and Mrs William RATHBONE. To their fostering care we owe the recognition of their services, and the institutions to which these gave rise. Here, then, was the germ of public wash-houses, institutions called into existence as a means of palliating a great evil. Stimulated by the success which attended the effort of Mrs WILKINSON and encouraged by the eagerness of the poor to avail themselves of the scanty accommodation she had been able to provide, the Town Council at the instance of Mr RATHBONE determined to erect at the public expense, wash-houses in connection with baths for the people. A site was obtained in Upper Frederick St, and a building on a very humble scale was provided as an experiment, the first public establishment of baths and wash-houses in this country. Opened on the 28th May 1842.

The building was soon found to be not sufficiently capacious, its success beyond the expectations of the sanguine, the Council resolved to erect another building of greater extent, with improved accommodation and arrangement of appliances.

Liverpool now has three buildings of palatial size and splendour, these are the St George’s Pierhead, opened 1848, Paul St opened November 1846, and Cornwallis St opened May 1851, baths. The first baths opened in Liverpool in 1794 at the end of New Quay, these were removed in 1820, the floating bath was introduced in 1816.

At the opening of the new baths at Everton in June 1863, Mr WAGSTAFF refers to the great success of the baths since their first establishment in Liverpool. At that time, he says, Liverpool was suffering under a dire visitation of the cholera and they and the washhouses originated mainly with a poor woman named Catherine WILKINSON in 1832. He had witnessed from his own window people sinking down from cholera at door steps and public house doors. Catherine WILKINSON having a large cellar and large sized boiler, cleansed the things of the poor people at the lowest possible charge, with that interest in the welfare of the labouring classes, seeing the good effect of this woman’s labour, he took a warm interest in the matter, from small beginnings great results followed and led to the establishment of public baths in Liverpool, and had given tone and impetus to the whole kingdom. Subsequently the Paul St and Cornwallis St baths were established and now the Everton Baths had been that day opened for the benefit of the public, he was sure would be of the greatest good to the community.

At the prize distribution of the Liverpool Institute in December 1884, William RATHBONE refers to instances of success in life, with reference to Catherine WILKINSON he says :-

But my last and humblest instance of success is, to my mind, the means being considered, the most telling of all Kitty WILKINSON was the wife of a cotton porter in my father’s employment, and at that time a cotton porter’s wages were, I think only 15s or 20s per week. Having only one child of her own Kitty and her husband adopted, brought up and educated on their scant wages, no less than 15 orphans. When the cholera broke out in 1831, a panic ensued, and there were riots Kitty, however knew no fear when work was to be done. She nursed the sick and got others to do the same, she faced and shamed the rioters, she established in her own cellar a washhouse where the poor of her neighbourhood could do infected and other washing. The knowledge of the good thus done led the late Rector Mr CAMPBELL, my father and mother, and others to advocate the establishment of public baths and washhouses. To Kitty’s example we owe their establishment. No one in Liverpool did more than that poor woman to check the spread and to promote the cure of cholera in its first and worst outbreak. With the example of the great things she did with her small means, will anybody ever use again that stupid word “impossible”

The death of Catherine WILKINSON, the originator of the wash-house

This humble but not unknown philanthropist died on Saturday last at the age of 73, and a highly respected correspondent has sent the following notice of the deceased, a tribute to her memory emanating from one who has an instinctive appreciation of all that is good and generous :- “It may be well of those of small means, as well as for those more largely endowed, occasionally to review the respective responsibilities of the position in which they are placed and to take note of what might be accomplished with very small means but with a large heart. This was eminently the case in the humble individual whose death we this day record. The good seed was sown at a very early age by her attendance upon an infirm old lady while going on her rounds to relieve the sickness or the sorrows of the poor. The seed fell upon good ground and produced an abundant harvest through her long and useful life during which her poor neighbours were always sure of her sympathy and advice, and such aid as her small means but self-sacrificing energy would make available. As to her own necessities which so circumstanced must often have been pressing, she was remarkably unrequiring and reserved.

During the eventful season of the cholera in this town her efforts [fearless of risk to herself] were unceasing both by day and night, and they were rendered more valuable by her practical knowledge and inventive power to meet emergencies as they arose. It was during this period that she originated in her own cellar, the plan for wash houses for the poor, which have since been generally adopted. Though labouring for her daily bread, yet she and her husband [who died some years before her] at different times received many orphans into their dwelling, with no claim upon them but their destitution, taking charge of them with parental care until able to support themselves, or otherwise provided for. In a truly Samaritan and Christian spirit her efforts to relieve knew no limit but in her power to serve. The widow’s mite was not infrequently all this world’s wealth which she had to give.

Was interred at St James Cemetery on the afternoon of the 14th November 1860. Amongst those present were Mr W. RATHBONE, whom she had served for over half a century. Though she had no child of her own left to see her laid to rest, she had many that might be called [as she called them] her own, having brought up many orphans in her time there were many of her adopted children present. Mr SHIMMIN of Pitt St conducted the funeral.