Loss of the EMPRESS of BRITAIN

MERSEYSIDE MEN IN EMPRESS OF BRITAIN

Many Merseyside men were members of the crew of the luxury liner Empress of Britain, which was bombed and machine gunned, 160 miles off Ireland on Saturday and which afterwards blew up and sank while on tow.

The Captain, who is amongst those saved, stood on the burning bridge and encouraged the anti-aircraft gunners until they were killed or wounded.

The £3,000,000, 42,000ton luxury liner was left a blazing wreck, attempts were made to salvage her but she blew up while being towed. 45 people are at present unaccounted for.

Among many acts of heroism that stand out in the attack is that of the Commander, Capt Charles Howard SAPSWORTH, who stood on the bridge encouraging his anti-aircraft gunners, until they were killed or wounded and the guns were out of action. The raider then continued to machine-gun the bridge and the helpless passengers on deck. 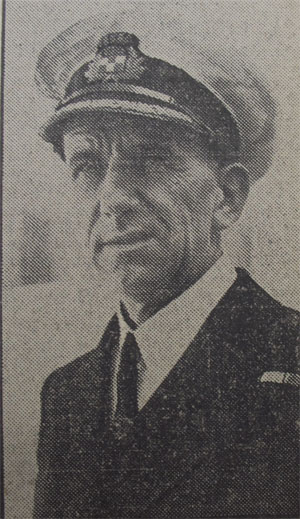 Captain Sapworth
Capt SAPSWORTH brought back the King and Queen on the Empress of Britain from their Canadian tour. He arrived back at his home, at Belgrave Cresent, Edinburgh on Sunday.

The engine-men kept the engines going, though they had to wear gas-masks to exist in the smoke and flumes through which the ships powerful lights could not penetrate. Hand torches had to be used by the men, to grope their way through the murky depths of the ship, which was blazing from stem to stern.

After dropping the first bomb the raider returned and dropped 4 more, including incendiaries. The liner caught fire and the passengers took to the boats, some boats could not be lowered as they were ablaze and so the sailors made rafts for some of the passengers. There was ample time for the women and children to get in the boats. While waiting instructions they coolly waited below without panic. Many could not get away immediately and about 300 made there way to the forecastle. The last, taken off 6hrs later. In the stern the people gathered and were taken off an hour after the attack. The survivors were landed at a Western port on Sunday.

The youngest passenger, Neville HART, aged 11mths was saved by being tied in a blanket on the back of a sailor who slid down 60ft of rope to a lifeboat.

Merseyside members of the crew who arrived at Lime St, Station, yesterday morning paid tribute to one of the heros of the disaster, a naval man who was returning home as a passenger. He directed operations in the bow of the vessel, and, setting a wonderful example in courage and calmness, kept the people around him in good spirits by cracking jokes as though it was an everyday occurance to be bombed and machine-gunned.

" He knew exactly what had to be done, and did it with perfect coolness, everyone had confidence in him and obeyed his orders. I take my hat off to him, he was amazing." said a young seaman.

Several other, crew members confirmed this picture of the naval man.

A graphic description of the bombing was given by on of the seamen. It was overcast in the morning, he said, and the German plane came out of low cloud without warning. It shot down in a deep dive dropping its bombs and raking the deck with machine-gun fire, very soon the vessel was an inferno.

James DEAN of St Andrews St, Edge Hill, Liverpool, said he was below when the bombing started and rushed on deck to see the bomber flying low over the ship. Despite the ruthless machine-gun fire and the raging flames along the whole of the deck, there was no panic. An anti-aircraft gun was put out of action so the ship was unable to reply effectively. He feared some were trapped below deck, he got away in a lifeboat and was picked up by a rescue vessel.

A steward, said, a single enemy plane suddenly came out of the clouds, machine-gunning the decks and the crew as it went. Some bombs dropped wide of the mark and the plane continued to circle the ship before dropping bombs which set the deck ablaze.

"It was like an inferno, although I have been on the ship for a long time and know every exit from the kitchen, I could not find my way out. All the staircases were ablaze, my only means of escape was through a porthole which I scrambled through and flung myself into the sea."

"The water was icy cold and I kept swimming to prevent myself from becoming frozen. There was a heavy sea and it was impossible to reach the boats against the swell, while, those in the boats were unable to pull to members of the crew any distance away in the water. I and a colleague who followed me through the porthole, were in the water nearly an hour before we were picked up."

Among the rescue vessels were two warships and three trawlers, who quickly answered the vessels SOS.

Another survivor, said, there was no panic, the bombing was over in less than half an hour, occurring at 9.30am and many of the crew were unable to escape for some hours, but, conducted themselves with exemplary coolness and obeyed orders despite the rapid extension of the flames and the bursting of ammunition.

SAW BOMBING FROM THE CROWS NEST

A graphic account of the bombing was given by, able seaman, James CARROLL of Coningsby Rd, Anfield.

Mr CARROLL had a "grandstand" view of the bombing, he was in the crow's nest when he happened to look astern and saw the German plane diving out of the clouds towards the ship. He saw the plane swoop over the ship and a bomb leave the plane and strike the ship. The crow's nest was about 160ft above deck and the plane came down so low that it was at eye-level.

He did not realise for a few minutes any damage had been done, and did not hear an explosion. It was not for some time that he saw huge clouds of black smoke issuing from the deck. He ran down the ladder to his air-raid precautions station and by that time the deck was blazing furiously.

He and the bosun had difficulty getting to the lifeboat stations and as they fought through a narrow alleyway filled with smoke and flames they heard the noise of whimpering. The bosun fought his way through the flames to where he thought the noise was coming from, and found a woman huddled in a corner. He dragged her out and carried her on his back to the lifeboat.

When Mr CARROLL got on deck more bombs had been dropped and the ship was blazing fiercely . He told of a remarkable coincidence when in the lifeboat. Among the members of the crew of the Empress of Britain were three brothers, named TRIGGS from Hoylake, one was in the lifeboat. They were rescued by a trawler, and one of the trawler crew was another brother. The two were overjoyed to meet each other. 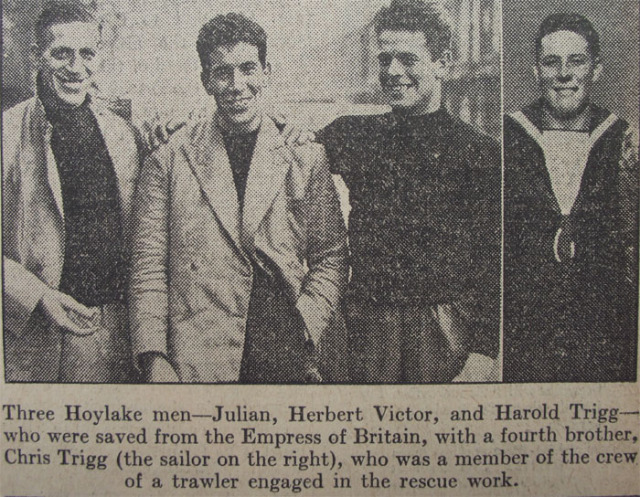 [A photograph showing, three Hoylake men, Julian, Herbert Victor and Harold TRIGGS, saved from the Empress of Britian, and a fourth brother, Christopher TRIGGS a member of the crew of the trawler engaged in the rescue, forwarded by a descendant Julian TRIGGS
WOMEN'S COURAGE

Women members of the crew who were passengers in the lifeboat showed magnificent courage, although they were in danger of being killed themselves if the vessel blew up, they insisted in helping the seamen haul aboard members of the crew swimming about in the water and rendered first aid to those suffering exhaustion after their ordeal in the freezing water. "They were real heroines," commented one survivor.

A survivor described the courage of the steward and the ship's doctor, "The Steward deserves the Victoria Cross" he said "with the kitchen crew trapped in their quarters and faced with throwing themselves through one of the doors into the heavy sea with no lifeboat nearby. The Steward aided by the Electrician climbed up a rope at the side of the ship to a lifeboat, impossible to reach from the decks. Although the side of the vessel was red hot from the flames inside, he made his way to the boat and lowered it. He was probably instrumental in saving the lives of 40 crew members."

They had the greatest admiration for the ship's doctor who at great personal risk, climbed from lifeboat to lifeboat finding the injured.

"He performed an amputation on one of the survivors picked up by a warship and continued to treat the injured even after they reached port." He said.

Another to risk his own safety was the ship's engineer, who, when one of the motor-driven lifeboats was holed, set to work to detach the engines and fit it in a motor-boat, the engine of which had refused to function. By his cool action he enabled the ordinary long-boats which were impossible to row in the heavy swell, to be towed around the ship to other members of the crew who were struggling in the water.

The large proportion of the crew reside on Merseyside, when they arrived yesterday morning they were all in good spirits, and all anxious to get back to sea as soon as possible.

MERSEYSIDE MEN IN THE EMPRESS OF BRITAIN 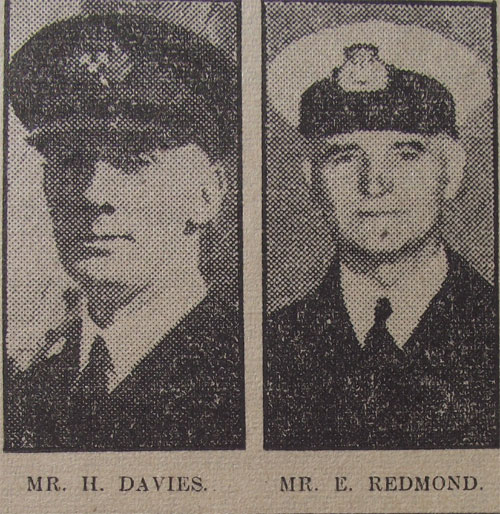 Among those missing is Mr E. REDMOND, Chief engineer, of 34 Greenheys Rd, Wallasey

The casualties include, seaman John ROBERTS, aged 19, 4th son of Mr and Mrs E. ROBERTS of 2 Shaw St, Hoylake, officially reported missing but now reported to have been killed by the fall of a crane as he was making for his boat station.

Mr H. DAVIES [in hospital wounded] Chief officer of 8 Sandfield Ave, Meols Parade, Great Meols, Cheshire, a native of Birkenhead, who joined the C.P.R, in 1917 as 3rd officer and has been in the Empress of Britain since 1935

Merseyside men who are saved are Mr A. D. MORISON, 3rd officer of Alexandra Drive, Liverpool, Blue Funnel Cadet, who joined the Canadian Pacific Railway as 4th Officer in 1935

Mr W. Stanley PEARCH, Purser, a native of Liverpool, who joined the liner in 1931, and saved her papers and valuables.

Mr Robert WHITE, 2nd Purser of 20 Greenfield Rd, Stoneycroft, who was purser also on the old Empress of Britain.

Of casualties known at present.