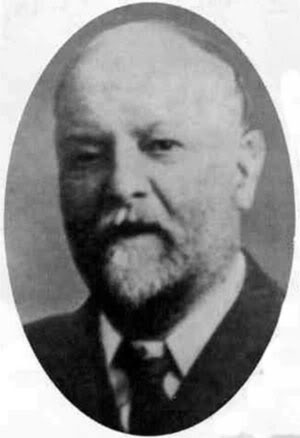 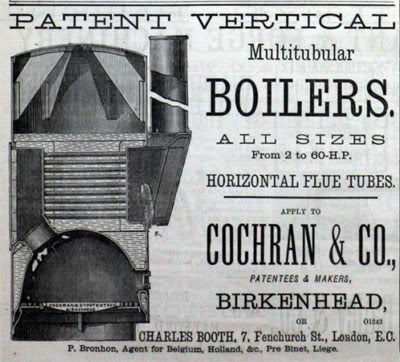 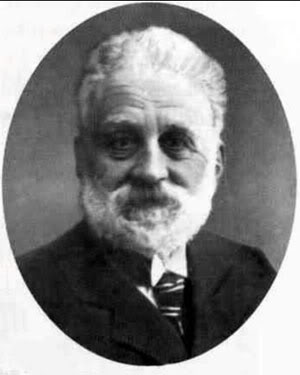 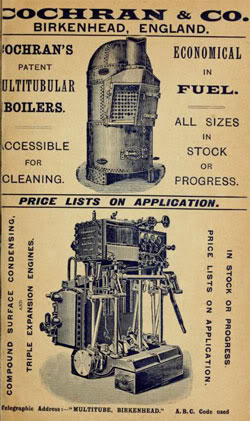 The first Cochran boiler was designed by Mr. Edward Crompton, originally superintendent engineer of the firm of Messrs. Alfred Booth and Co. His partner in the founding of the firm of Cochran and Co Mr. James T. Cochran, at that time manager of the well known firm of James Taylor and Co., Birkenhead.

Cochran and Co commenced in 1878 by Taylor and Cochran, shipbuilding and engineering was carried on there until removal to Annan, 1st submarine built on site, and the firm pioneered shallow draught stern wheel steamers, they increasingly concentrated on boiler production, and shipbuilding gradually ceased, Cochran and Crompton left the business in 1902. Source courtesy Sottish Archives Network

Cochran and Co, Birkenhead the Resurgam

This vessel was successfully launched at Birkenhead, a few days ago from the building yard of Messers Cochran and Co, engineers, Duke St, Birkenhead. She is 40ft long 9ft beam and tapers to both ends, with a displacement of more than 30 tons. After preliminary experiments at the Great Float, she went to sea on her first trial trip intending to work her way round to Portsmouth by easy stages, with the view of having her capabilities demonstrated to the Lords of the Admiralty. The inventor Rev George William Garrett of Manchester has written the following account of her first trial trip :-

"Our crew consisted of myself, Captain Jackson [master mariner] and Mr George Price as engineer, and we left the Alfred Dock, Birkenhead on Wednesday night about 9pm. The night was very dark and a little misty, which made it necessary for us to proceed cautiously down the river until clear of shipping. However, we reached the Rock Lighthouse with out accident of any sort and entered the Rock Channel about 10pm. When we started Captain Jackson remained outside on the look-out, whilst I took the helm, but as soon as we were fairly in the Rock Channel, Captain Jackson came inside, when we shut ourselves up and fairly started on our way. We passed down the Rock Channel and safely making Spencer's Spit, we turned into the Horse Channel, which we cleared in due course, and were then fairly at sea. We laid our course for the North-west Lightship, and went very slowly, intending to make some experiments in Victoria deep as soon as daylight should come.

When the morning of Thursday came there was a thick fog, which prevented our making the experiments we wished, and necessitated our proceeding very carefully. The fog did not lift all day, so we moved about testing various parts of our internal machinery till the next morning [Friday]. The sun rose beautifully on that morning, and the weather being clear we were able to make some progress with our experiments. We had now been at sea about 36 hours, a great part of which time we were under water, and we felt desirous of making some port, as sleeping on board the Resurgam is not attended with such comfort as we might desire. At this time we found the North-west Lightship close at hand, bearing about north, so we determined to put in the river Voryd, as there is good anchorage there, and she will be dry every tide, which is very convenient, as we are going to make a series of experiments with various propellers.

The boat answered splendidly in the sea way. The seas pass easily over her, and cause hardly any motion, nor do they interfere in any important degree with her way of steering. The three of us landed at Rhyl in perfect health, but rather tired and dirty. However, after a good wash and hot dinner our comfort was entirely restored, and we could congratulate ourselves in having passed successfully through as novel and interesting a trip as any sailors could wish to experience. We remain at Rhyl for a few days, to perfect a few little matters of some importance to our future comfort."

Invented by Rev G. W. Garrett, capable as being used as a formidable weapon afloat, has the power of sinking and remaining under water for very many hours, and thus can enter any blockaded port unperceived. No compressed air is carried, but the air in the boat is maintained at its normal composition by a chemical apparatus invented by Mr Garrett. When under water no smoke or gas is given off, although an engine of considerable power is kept in motion. Various experiments have been made with the vessel in the Great Float, Birkenhead, before setting out on a voyage to Portsmouth. On December 10th, Mr Garrett, Captain Jackson and Mr George Rice, engineer, entered the boat to start for Portsmouth, but after 36 hours journey in thick fog, a great part of the time being under water, they were obliged to put into Rhyl, as there are not many comforts on board for an extended trip.. The boat, the inventor says is in every way a success, and will easily perform what is expected of her, and thus becomes one of the most deadly weapons of naval warfare 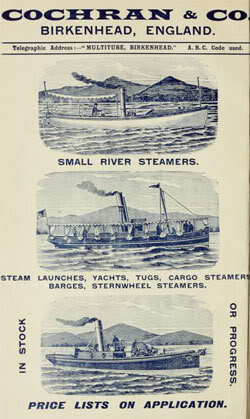 1890, constructed a number of steel and wooden steamers, lifeboats and other craft. Converted the wooden steamer Saxon into a screw steamer. output 386 tons 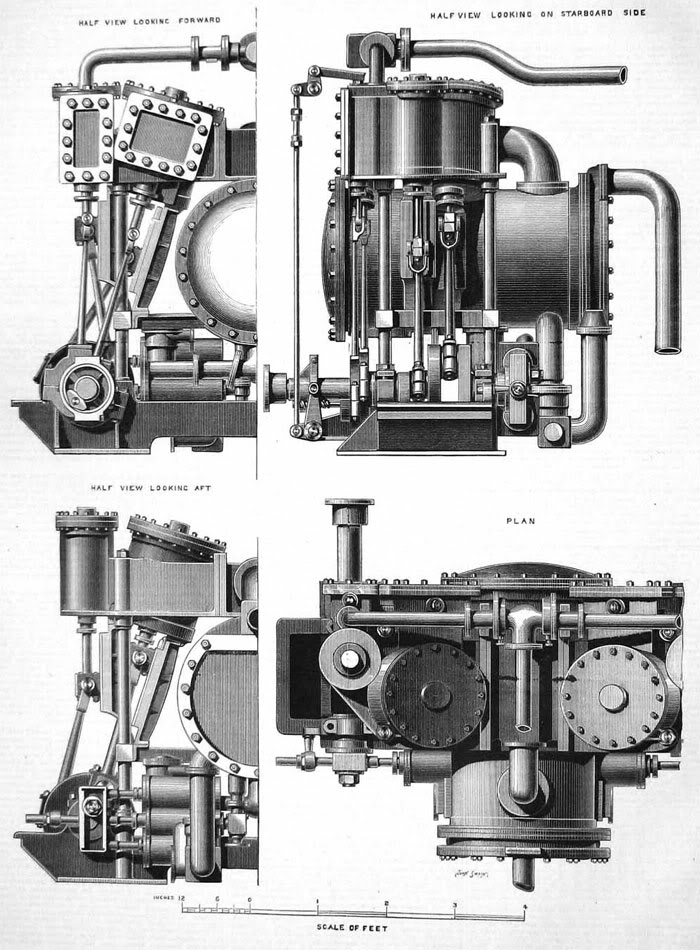 Cochran & Co, Annan, Ltd was registered as a limited company first on 3 February 1898, with as its main purpose 'to acquire and take over as a going concern, and carry on the business of engineers and boiler makers now carried on by Edward Crompton and James Taylor Cochran at Birkenhead [Chester] ... also the general business of engineers, boiler makers, engine makers and builders of small craft', plus other similar machinery and activities including boat building. Messrs Crompton and Cochran already had the Birkenhead-based business of Cochran & Co, which was sold to the new, Annan-based firm. This firm was wound up voluntarily, because of its liabilities, at an extraordinary general meeting on 1 December 1903. ----- Source courtesy Scottish Archive Network 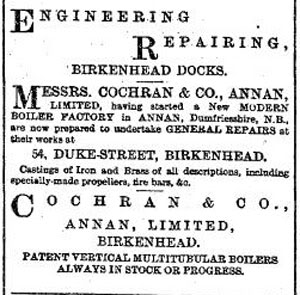 In an Ad 1899, concerning their removal to Annan it says boilerworks, iron, works etc, still to be carried on at 15 Duke St, Birkenhead 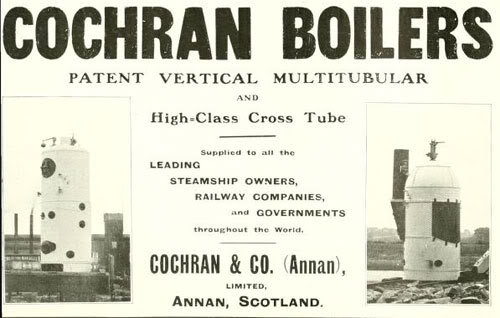