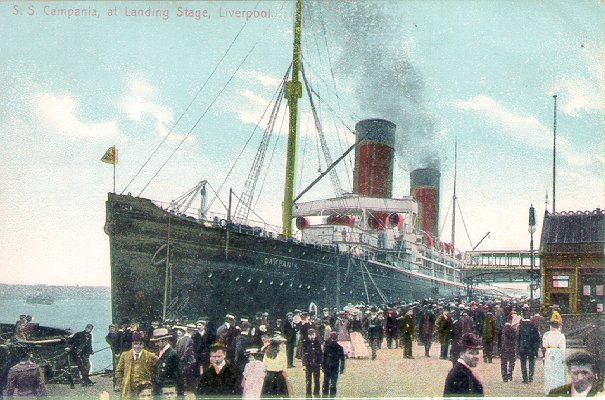 Campania at Liverpool Landing-stage
Maiden voyage of the CAMPANIA, Liverpool to New York, 1893

Maiden voyage of the CAMPANIA, Liverpool to New York, 1893

Departure on her maiden voyage

The interest which has been excited in shipping circles during the past few weeks by the addition of the magnificent new steamer CAMPANIA to the Cunard fleet culminated in quite a public demonstration of enthusiasm on Saturday afternoon, when the noble vessel left the Mersey on her maiden voyage for New York. Since her arrival from the Clyde at the beginning of last week, the CAMPANIA has been moored in the Sloyne, and preparatory to setting sail on Saturday she came down the river and anchored in a position which gave sightseers a fine opportunity of viewing her splendid proportions. Captain HAINS, R.N.R, commodore of the fleet, who had previously had charge of the ETRURIA, was in command, and some idea of the vastness of the ship may be formed when we state that the crew numbered 400.

No one was allowed to go on board except passengers and invited guests, but large numbers of people personally interested in the shipping trade, friends of departing passengers, and the general public crowded the Landing-stage up to 2 o' clock, when the last tender left with the saloon passengers. For the convenience of this class of passengers the London and North-western Railway Company, ran a special train from Euston, leaving at 3.50am, and arriving at Lime Street after a journey of 4 hrs 10 mins, including stoppages. The train conveyed a large number of passengers, and also guests invited by Sir John BURNS, Bart, [chairman of the company]. Mr G. P. NESIE, superintendent of the London and North-western Railway, accompanied the train which at Lime St was met by Sir William FORWOOD, Mr James SHAW, and Mr F. W. THOMPSON, American passenger agent.

Sir John BURNS was accompanied on the run to Queenstown, by the following party :-

The party were to return last evening from Queenstown to Holyhead by the HOUND, and thence to London. Several of the party were brought by that steamer, which belongs to the Burns Line of Glasgow and Belfast mail boats, from Glasgow to Liverpool, she then proceeded to Queenstown to await the arrival of the CAMPANIA.

Amongst the passengers were several well known Liverpool gentlemen, and their friends mustered in good force to see them off. The voyagers included Alderman T. W. OAKSHOTT, J.P, who in anticipation of his voyage, had been accorded a farewell dinner at the Alexandra Hotel. He goes out representing Messers FOWLER Bros, and Co, and hopes by his visit to America to obtain information and experience which will be of value to himself and his colleagues on the directorate of that company. Another gentleman largely connected with the trade between this port and the United States, proceeding with the CAMPANIA was Mr J. A. M'NEAR. He also had been entertained to a farewell dinner at the Adelphi Hotel by Messers D. LEWIS and D. M. ELLIOTT, the other guests being Messers L. L. LEWIS, T. O'REGAN, F. SOUTAR, D. H. MENKE, R. B. CLUNIE, T. H. HIGGIN, W. ROSS, T. HILL, G. W. HARRIS, G. HIGGIN, G. C. BARKER, E. NICHOLSON, T. WIGAN, A. G. RAE, H. LEVEY, S. MEYER, E. COTTAM, E. LEVEY, A. MEYER, J. KEPPIE, H. CORNETT, R. ROSS, G. BLYTH, T. H. JEVONS, W. WILLIAMS and S. SAMUELSON.

The CAMPANIA sailed as soon as practicable after the saloon passengers and their luggage had been transferred from the tender, and her passage down the river was cheered by people on the stage and the dockquays. The entire accommodation that the vessel possesses for saloon passengers has not been taken up, the season for this class of visitors to the United States having hardly yet set in. She carries, however, a full complement of steerage and a large number of second cabin passengers. Mr Andrew LAING, representing the builders [the Fairfield Shipbuilding and Engineering Company] who was on board, will give special attention to the engines. The next boat of the Cunard line proceeding to New York is the SERVIA, which sails tomorrow.

The Press Association's Queenstown correspondent states that the CAMPANIA made the run from Liverpool in 11 hrs 40 mins, notwithstanding that the engines were not driven at full speed. The engineers expect that the CAMPANIA will be abreast of Sandy Hook within five and a half days. As mentioned above, the guests of Sir John BURNS included the Right Hon Sir J. MORLEY, Chief Secretary for Ireland. The Chief Secretary landed in the morning at Queenstown, intending to travel by the 10am train to Dublin, but owing to his baggage being accidentally left on board the CAMPANIA he was unable to proceed in that train. The fact that Mr MORLEY was in town quickly got abroad, and when he suddenly proceeded to the Deep Water Quay, to go aboard the steamer HOUND to luncheon with Sir John BURNS and party, he was loudly cheered by a crowd of townspeople. Later on in the day, when the Chief Secretary was expected to land from the HOUND to proceed by the 4pm train to Cork, a local brass band, accompanied by several hundreds of people, proceeded to the Deep Water Quay, intending to give Mr MORLEY a hearty greeting, but were disappointed, as the right honourable gentleman proceeded direct to Cork by special steamer. The Queenstown Municipal Board also intended to present an address, be he requested not to be pressed to receive it, as his visit was private.