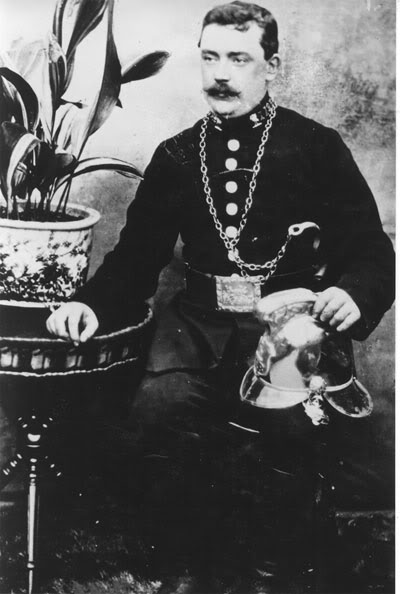 1905 Dec 02nd Sat, The SM he was riding on collided with a wall on Edge Lane after a coupling connecting rod broke. Fireman Gavan seriously injured his left knee. 1909, Moved to Essex St on the closure of Mill St

About 1 o' clock the brigade was summoned to a fire in a house in Charlecote St, Toxteth, after reaching the scene the men got down from the engine. Afterwards the driver William GAVAN aged 37, was driving the engine down Charlecote St, which is a steep bank, when it got out of control. Avoiding a large crowd of people gather round the fire GAVAN drove the engine straight against a house wall, the force of the impact sent the motor back several yards, and it ran into some railings which prevented from falling 100 ft down into the dock. The wall of the house was driven in, the engine damaged. GAVAN was injured about the head and died almost immediately. Stoker BLUNDELL who was on the engine when it broke away made a leap for safety and was injured by the fall. Police Sergeant HEWLETT was knocked over by the engine in trying to save some of the crowd. The house at which the fire occurred was gutted and one of the tenants had to leap from a window to escape the flames

1912 Dec 22nd, He was the driver of the SM from Essex St which ran out of control on the steep gradient of Charlecote St, en route to a fire at No 37 St. He was killed instantly when the SM struck and gashed his forehead as he jumped clear at the last moment, aged 40 with 18 years service

1913 Jan 06th, His widow Jane applied to the WC for permission to keep his helmet as a memento of his service, approved, they had no children

Jan 20 - A pension was granted