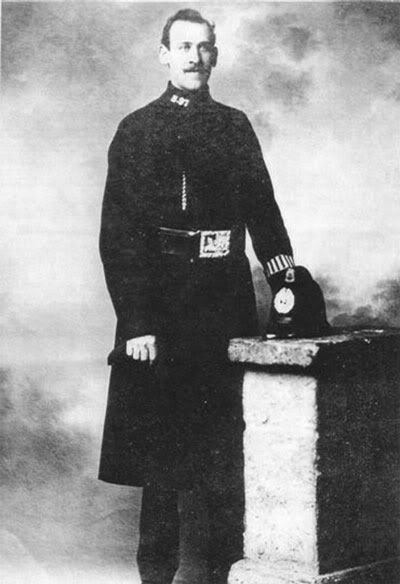 Aged 32, of Romulus St, Edge Lane, born 1882, Helsby Cheshire the son of George a carpenter and joiner and Mary, one of 6 children. 1901 worked for the Telegraph Manufacturing Co at the Britannia Cable Works Helsby, as a rubber machinist aged 18 living with his brother. 1904 married Rebecca, 1905, daughter Doris born, 1907, daughter May born, 1909, daughter Olive Mary born, joined the City of Liverpool Police aged 27 as PC 97B. 1913, transferred to the Liverpool Fire Brigade as PC 350H based at Hatton Garden. 1914 Mar - Son Joseph born just 2 weeks before his fathers death

Inscription Police Memorial Toxteth Park cemetery
Apr 07 Tue - He was called to a fire in a warehouse on Grundy St, Sandhills containing 4,000 bales of cotton belonging to Zerega & Co. It proved to be the largest fire in the City for years. It spread to an adjoining warehouse where as it developed a gas explosion took place. The roof of the first warehouse later collapsed, venting the fire. In all it took 18 hours to subdue the flames. The call was received at 05.00 and the 1st attendance was Westminster Rds 1st turn machine [Liverpool Fire Brigades sole petrol motor], 14 minutes later assistance was requested and 3 Fire King, Steam Motors, the Daimler motor tender, Electric Escape & a reel cart responded with Superintendent Weir, C Inspector McGregor & Insp Clarkson, North District Inspector.

The Liverpool Salvage Corps also attended under CO Muir with a trap from the North station, Derby Rd. Damage to the cotton alone amounted to 100,000 pounds.

Late in the day NEWARK was last seen at work on the first floor, later a helmet was found outside by an escape but it was merely placed it in a doorway. Only late that night was it realised that NEWARK, aged 32 was missing.

Apr 08 Wed - Only when most of the water had been pumped out of the basement was his body now found.

Apr 11 Sat -17 Firemen attended his funeral at Frodsham and the WC agreed to reimburse their fares. NEWARKS body was interred in the graveyard of the Parish church of St Mary the Virgin, Overton SE of Wrexham, famous for its ancient yew trees

Apr 20 - His widow and 4 children were granted pensions

2005 - Fm Newarks helmet, damaged in his fatal fall, was given by his family to MF&RS and placed on display at Service HQ

The great cotton fire in Grundy St, Sandhills, Liverpool, yesterday, was attended with a fatal result, Joseph Newark, a young fireman, being killed while fighting the flames The manner in which he met his death cannot be ascertained with certainty, but it is thought that fell from one of the upper floors to the basement, where his body was discovered lying in the water which had accumulated there.

It was only late in the afternoon after the fire had been got under that Fireman NEWARK was missed. Curiously enough his helmet was found lying in the street. A search was made and the body was found at 1am this morning, lying in several feet of water in the basement of the building.

NEWARK was a young man, aged 29, with a wife and six children, the youngest child a baby only a fortnight old. He joined the Liverpool City Police Force in August 1908, as a constable and last November went on the permanent staff of the Fire Brigade. Previous to joining the force he was employed by an electric cable making company. He was a fine specimen of a man standing 6ft 2ins and was very popular with his colleagues in the police force and fire brigade who will regret his loss. It was mainly on account of the marked ability he displayed on several occasions as an auxiliary that he was selected to do permanent fire duty. He gave great promise of usefulness and was full of energy as well as courage.

Inquest on a Liverpool Fireman

The Sandhills fire fatality was investigated by the Liverpool Deputy-coroner and a jury today, when the inquest was held on the body of Staff-fireman Joseph NEWARK of Romulus St, Edge Lane.

NEWARK was engaged in subduing the outbreak in the cotton warehouse in Grundy St, of Great Howard St on Tuesday. Late in the afternoon after the fire had been raging for many hours he was missed and it was in the evening that his body was found lying in several feet of water in the basement of the burned out building.

Evidence of identification was tendered by Jonah NEWARK a telephone wireman living at Stanley, who said that his brother was aged 32. Six years ago he joined the Liverpool Police Force as a constable and for the past 6 months he had been attached to the Central Fire Station. He was healthy and a steady man.

Chief Superintendent WEIR stated that at 5am on Tuesday the brigade at Westminster Rd turned out to an alarm of fire and 14 minutes later they sent for assistance to the Central Fire Station. Witness went to the scene of the outbreak with a large staff of men and found that the cotton warehouse was in full blaze from top to bottom and flames were coming out of the roof. The fire had extended to a second warehouse adjoining. The firemen had to work away until 10pm to get it under control.

NEWARK was last seen at 1pm and was then at work on the first floor of the warehouse. Nearly two hours earlier a helmet was found on the ground near the escape, and was placed by a constable in a doorway, it was not until the pressure had been relieved that an inquiry was made as to who owned the helmet.

A search was then made in all possible directions to find the deceased and it was not until about midnight when all the water had been pumped out of the cellar that he was found lying in the cellar under a large quantity of floating cotton. The body was received at the Prince's Dock Mortuary.

The Deputy Coroner, "From your experience and knowledge you are of the opinion that the man must have gone back to the first room of the warehouse and becoming overcome by smoke he made his way to the fresh air, but, that he missed the staircase door and walked out of the delivery door ?"

Superintendent WEIR, "There can be no doubt he went out by the delivery door."

The Deputy Coroner, "If that was so and he was unconscious when he fell, which was likely, the result would be drowning ?"

"Yes" Witness added that the depth of the floating cotton was such that the body had to be groped for before it was recovered. The theory that he came out of the delivery door was supposed by the position of the helmet when found. The fall would be about 10 feet.

Mr WEIR said a fire escape was pitched to the third floor, immediately opposite the delivery door, and it was due to this fact and the density of the smoke blowing out of the door that no one had seen him falling. There was no fall of bricks or debris.

Police-fireman MORLEY who is stationed at Westminster Rd station, said he turned out with the motor-engine at 5am, he was engaged at the fire all day and about dinner time he went to the first floor where the deceased was working with a hose. He assisted him for about half an hour and the smoke becoming very dense, they went out into the street for fresh air. He never saw the deceased alive again and did not know until 6pm that he was missing.

Police-fireman BREWER attached to the Central Brigade said that about 11am, a number of men working on the second floor came down the escape hurriedly as though they feared that something was about to fall. He helped one man who was hurt to a place of safety and noticed a helmet lying in the street. He thought no more of the matter until he heard that NEWARK was missing.

Sergeant M'CARTNEY, said that at 1am on Wednesday he found the deceased in the cellar area. The body was lying in over 3 feet of water in which there was a quantity of floating cotton. The deceased's watch had stopped at ten minutes past eleven.

Dr MITCHELL gave evidence to the effect that there were two small contused wounds on the head of the deceased which had been caused by the fall. They probably rendered the unfortunate man unconscious and falling into the water he was drowned. Death was due to drowning.

Superintendent WEIR, recalled said that the area door must have been open and the deceased evidently fell through it. Apart from that he was working in a safe place.

The jury returned a verdict to the effect that the deceased was accidentally drowned.

Mr EVERETT speaking on behalf of the police force and brigade, expressed their tribute of deep respect for the constable who had, had the goodwill and confidence of his superiors. He would like to say how very sorry they were and to offer their sincere sympathy to the bereaved wife and children. It was a bitter example of the dangers which the Fire Brigade were constantly facing in the cause of duty. He doubted whether the public always realised the perils which firemen had from time to time to face. It was gratifying to know that they always fulfilled their duties faithfully.

The Deputy Coroner was sure the jury, after hearing the evidence, would have no doubt that this man met his death in the noble discharge of his duty. He took it that some provision would be made for the widow and young children.

Mr EVERETT replied that they would benefit under the Police Act.

Alderman DUNCAN, as chairman of the Fire Sub-committee, expressed their deep sympathy. They appreciate the dangers which their firemen ran, and had never known them to fail in their duty.

The funeral of Fireman Joseph Newark, killed at the Grundy-street cotton fire, took place to-day, and was the occasion of a. striking manifestation of sympathy on the part of friends, Liverpool firemen, and the general public. The fire brigade from Hatton-garden made an impressive display, a hose-carriage drawn by four horses, turned out decorated with black and white ribands. A number of wreaths were conveyed on the carriage, which left Hatton-garden from the house of the deceased in Romulus St, Edge Lane, shortly after ten am.

A large posse of firemen representatives of the Salvage Corps, watermen, and other bodies, including foot and mounted police, attended. Superintendent WEIR was in charge accompanied by Inspector CLARK and WALLS. The salvage contingent was under the direction of Inspector DEANE.

There was much evidence of public sympathy as the cortege moved slowly onward through masses of spectators to Edge Lane, where many spectators gathered to see the body removed to Lime St, Station for conveyance to Overton, where the funeral takes place.