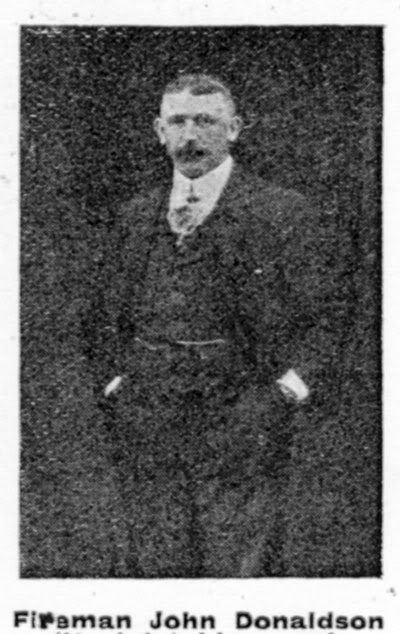 Inscription Police Memorial Toxteth Park cemetery
1914 Apr 30 Thursday - He attended with the Reel Cart from Salthouse Dock at a warehouse fire on Hurst Street. Whilst taking a hose up the stairs he slipped and fell to the bottom. He went outside and complained of pains in his chest; he was taken by ambulance to the Royal Southern Hospital where he died soon after arriving aged 48, after 26 years service, he had been due to retire.

May 02 Sat - An inquest was convened. Evidence to the Deputy Corner was given by Dr Thompson who had performed a post mortem that he had found fatty deposits around his heart which had caused disease. A verdict of heart failure accelerated by exertion and an injury sustained in the execution of his duty was returned.

May - Buried in Toxteth Park Cemetery

WC awarded a pension to his widow and 2 children

A disastrous fire which broke out in a cotton warehouse in Hurst-street, off Park Lane, Liverpool, last evening, resulted in the complete destruction of the building, containing 1,000 bales cotton, and in the death of Fireman John DONALDSON, a popular member of the brigade with 27 years exemplary service to his credit. The origin of the fire is unknown, but an estimate of the damage is put at 20,000 pounds.

The salvage men are still at work today, as it is never safe to leave smouldering cotton until every bale has been brought out and inspected or broken up, and it may be a week before the men are able to leave the scene of the outbreak. The outbreak was the latest of an epidemic of fires which has raged in Liverpool during the past six weeks. About a month ago a similar conflagration occurred in Grundy St, in the North-end of the city when 80,000 pounds of damage was done and Fireman NEWARK fell a victim at the post of duty. Since then numerous fires of a minor character have taken place, fortunately without attendant loss of life.

Yesterday's outbreak was discovered shortly before 5pm by the men working in the building, smoke being seen issuing from the third floor of the warehouse, which is six storeys high, practically in the middle of a huge block belonging to the Liverpool Warehousing Company. The Central Fire Brigade from Hatton-garden on being summoned were quickly on the scene and found the contents on the third floor blazing fiercely. It was apparent at a glance the building was doomed and Chief-superintendent WEIR and Deputy-superintendent M'GREGOR wisely directed the efforts of the brigade to confining the fire to one building. This was vitally important as if the flames had spread the whole block would have been jeopardised.

The Salvage Corps in charge of Chief-superintendent MUIR worked strenuously side by side with the fire brigade in this endeavour to put a circle of water around the burning warehouse. Fortunately the employees had no difficulty escaping from the burning building without injury, 20 of them rushing into the street immediately the alarm was given.

The flames quickly pierced their way to the upper floors and in an incredible short time issued from the roof. Powerful jets were brought to bear both inside and outside of the warehouse, and the vivid tongues of flames soon gave place to dense volumes of smoke, which made the task of the fire fighters a most hazardous and perilous one. It was about this time that DONALDSON was seen to fall, evidently suffocated by the smoke, down a staircase leading to the third storey of the building. He was picked up unconscious and died on the way to hospital. The collapse of the roof followed, a shower of sparks with dense volumes of smoke marking the event. A number of the firemen and several policemen, mounted by means of the escape to the roof of a building opposite, and from there an effective stream of water was poured on to the burning mass. Those combined efforts were successful in keeping the fire in check. The task of the firemen was almost superhuman. They stuck pluckily to their work, and it was to their gallantry, nerve and indomitable bravery that a magnificent save was effected. A dozen firemen were overcome by the smoke and brought away exhausted. Others in readiness at the Central Police Station took their places and it was thus that human efforts overcame the dread elements.

The fatality of DONALDSON the Auxiliary fireman has caused intense regret among the staff of the Liverpool Fire Brigade and the salvage men stationed at Hatton-garden coming so soon after the other cotton fire incident. DONALDSON was 48 and had put in his full term of service and might have retired on a pension when he chose, but he was full of vigour, and apparently had many years of useful work before him. He was connected with the Essex St, C. Division, he was also turncock at the Salthouse Dock and had charge of the reel located there. He leaves a widow and family.

He was known to be brave as well as skilful and probably both these characteristics as well as his sense of duty, led him into danger. It is thought that the exertions he took affected him, while he would be less able than a younger man to stand the effects of the smoke. It is possible he may have been tripped in the darkness through some entanglement in the apparatus he carried but this is not regarded as likely. Stifling smoke is one of the greatest perils met with at cotton fires, it is not surprising accidents occurring.

Inquest story of exertion and injury

"Heart failure, accelerated by exertion and the injury sustained in the execution of his duty" was the verdict returned today at the inquest on John DONALDSON, the dead Liverpool fireman.

Some years ago, according to the evidence submitted to the jury, the deceased was a prominent athlete, but of late he had become somewhat corpulent. Last Thursday in answer to a summons to the cotton warehouse fire in Hurst St, he hastened with a reel from the Salthouse Dock, Fire Station to the fire, a distance of 600 yds.

Later he seemed to walk away from the scene of the outbreak with some difficulty, and he took refuge in a neighbouring warehouse, where stimulants were given to him.

He was asked whether he had been "smoked" He said he had not but that he had been going up a spiral staircase with some hose when he slipped and fell down to the bottom.

He complained of pains in the region of the heart.

DONALDSON was removed on an ambulance to the Southern Hospital, where he died soon after admission and a report as to a post mortem examination was submitted by Dr THOMPSON. No external injuries were found but there was definite signs of fatty disease of the heart which apparently accounted for the main collapse.

The Deputy Coroner, "Would the exertion of running with the reel and then the effects of such a fall as has been described, accelerate death in the case of a man in that condition?"

Witness, "Yes, in my opinion it would."

Expressions of deep sympathy were expressed by the coroner and the jury to the widow and the police on the sad death of one who, in the words of Mr INGLIS was one of the most respected and honoured members of the force.

Alderman DUNCAN on behalf of the Fire Police Sub-committee, said, that in the deceased they had lost a very valuable servant and one who was spoken of most highly by his colleagues.

For 20 years they had, had, no accident at all, and that there should be two deaths in such a short time was to be lamented. Mr EVERITT, Assistant Head-constable, said, the late officer was a comrade to whom they were very much attached, and who was held in the highest esteem by all ranks. From recent events, he remarked, it was pretty clear that when a policeman and fireman went on duty, he risked his life. Of late there had been revealed a very high standard of duty. That was a great tradition which they endeavoured to live up to and follow.