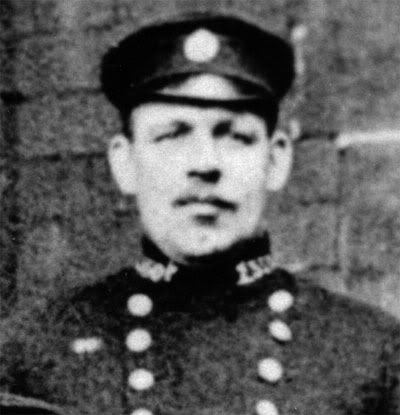 Whilst returning from Childwall the engine left the road in the darkness and ran up the bank and overturned. One of the firemen Edward JONES 350A was pinned beneath it and was seriously injured, he died later in the Royal Infirmary, he was 36yrs old, and was said to be the heaviest man in the force, his weight being over 18st. An ex-policeman he lived in Kensington and leaves a widow and three children. He had distinguished himself many times at fires in the city, and his loss will be greatly felt.

Stopped a runaway horse and was awarded a LS&HS medal. 1911 married Elizabeth, 1912 daughter Elsie born, was a member of the Police tug of war team.

1921 Mar 09 Wed - He was the driver of SM No4 at Kildonan Rd. Whilst returning from a, Shin Fein fire at Mr Walter Cunninghams Gorse Hey Farm, Well Lane, Childwall. It proved difficult to climb an incline and Jones reversed to try again, but the machine ran back into a ditch and overturned. He was trapped under the ladders and died later in the Royal Infirmary of injuries received. He was 36 years old and reputedly the heaviest man in the Liverpool Fire Brigade at 18st 5lb, he left a widow and 3 children

March 14th, - Funeral service, his coffin draped with a Union flag was carried on the HD Hose Carriage from his home. As well as a Liverpool Fire Brigade appliance machines from Bootle and Birkenhead Fire Brigades also attended together with a contingent from Manchester. He was buried in the, Firemans grave, in Smithdown Rd Cemetery

Apr 12th, His widow was awarded a pension.

On the night of Fireman Edward JONE'S death there were 14 farm fires indicating an incendiary origin, 11 were on the Lancashire side of the Mersey and 3 on the Cheshire side. All fires point to a careful plan, systematically executed, none of the incendiaries were seen at or near the fire which suggests the use of mechanical means, a theory supported by the discovery of a time fuse.

At Crosby 5 arrests were made of men who gave addresses in the area of Waterloo [believed fictitious], on two of the men revolvers were found. The men were detained by the police as they were apparently trying to get back to Liverpool and had almost reached the station platform at the time they were taken into custody.

At Roby a farmer discovered two men acting suspiciously near a haystack belonging to him and fired on them. One was wounded and captured, but the other got away. The captured man had a revolver in his hand and another in his pocket fully loaded. The man who escaped is believed wounded.

The fires stretched over a distance of 13 miles. The first occurred at 7.59 pm, the rest within half an hour. Localities in which they occurred, In Liverpool farms in Strawberry Lane and Mill Lane, West Derby, farm in Heathfield Rd, Wavertree, Farm in Childwall, Farm in Woolton, and Wheathill Farm, Gateacre. Outside the city, Maghull, two at Little Crosby, Roby and Sefton. In Cheshire, Church Farm, Bidston, Sutton's Farm, Leasowe

Parkinson's Farm, Moreton [all in the neighbourhood of Birkenhead and Wallasey] with the exception of the farm at Childwall and that at Gateacre, which were burning at midnight, all the outbreaks had been extinguished by the firemen.

In the case of one fire believed to have been caused by two men who arrived in a motor car, they parked near the farm and walked in the direction of the ricks, not long after they hurried back to their car, soon after a boy who was an eye-witness of their movements, noticed that the ricks were burning.

The brigade and farm servants were in most cases able to keep the flames from spreading to neighbouring farm property. In Wavertree the blazing ricks were in the neighbourhood of stables containing a number of pedigree shire horses, and the animals were removed to a place of safety. In most cases damage is confined to ricks of hay or straw, and to wheat, oats, peas and beans, but in other farms implements have been destroyed. The aggregate loss will reach a high figure, in the case of William John RAINFORD of Crosby, several valuable horses were burned to death. In most cases paraffin and other inflammable spirits had been used.

At Wallasey the brigade were handicapped at one farm by lack of water, the river Birket was dry, when the firemen had exhausted the contents of the farm pone the flames were allowed to do their worst.

The fire at Maghull at Wood End Farm, was speedily discovered and extinguished before much damage could be done, here again a bottle of paraffin was found.

Girdle of farm fires near Liverpool

14 outbreaks the work of Sinn Feins

An outbreak of some 14 fires believed to have been caused by Sinn Fein incendiaries has occurred in the Liverpool district. Soon after darkness last night many of the fires on the outskirts of the city were noticed almost simultaneously, and the fire brigades from all districts were summoned.

All reserve men and men off duty received an S.O.S, to return to man the engines, which were immediately pressed into service. Fires were reported at :-

A farm at Woolton

A farm at Sefton

Two or three fires were reported at Wallasey and one at Effingham Street, Bootle.

The girdle of fires around Liverpool last night shows the skilful plotting that the Sinn Fein terrorists are capable of. The authorities are doing everything in their power to stop these outrages, but they confess that gorilla incendiarism cannot be entirely provided against. Last night’s ten farm fires all occurred within three quarters of an hour exactly on the principle of the warehouse fires in Liverpool last November.

Farmers were prepared for the attack last night both in South Lancashire and Cheshire where the outbreaks occurred, and in the distance at Roby, a farmer noticing two individuals near a hayrick, shot them. One was wounded and captured and had in his possession two revolvers and several cartridges. The other man escaped but is believed to have been wounded.

Four other men from other locations were also detained. Damage at the various fires it is believed will amount to £20,000.

In one instance a number of valuable pedigree Shire horses were stabled near to the burning hayrick and it was with the utmost difficulty that the animals were rescued. When brought out of the stables in the full glare of the flames they neighed loudly and dashed away into the darkness, being recovered in adjoining fields. In several cases empty bottles, which appeared to have contained inflammable liquid were discovered in proximity to the fires.

Four men were arrested near Crosby Railway Station, in which direction they appeared to be hurrying. They were arrested after a short chase by uniformed police. Up to the present no charge has been preferred against these men, who remain in custody.

Farms were the object of attack in all but one instance. The exception was the Liverpool tramway employee’s recreation ground pavilion in Green Lane, Liverpool, which was fired about midnight and was entirely gutted.

Unfortunately the long sequence of occurrences did not pass without loss of life. The brigade which had attended the Childwall fire were returning, when the engine left the road in the darkness, and ran up a bank at the side. It was being backed when it overturned and one of the firemen Edward JONES, was pinned underneath. It was seen that he was seriously injured and he was removed to the Royal Infirmary, but on arrival there life was found to be extinct.

It is now established that incendiaries on this occasion made extensive use of motor cars.

Only fired when they refused to put up their hands

The desperate mood in which the incendiaries embarked upon their enterprise is reflected by the fact the man shot down by Mr John RIMMER, roby, farmer had a fully loaded 6 chambered revolver in his right hand and a similar weapon in his pocket.

Mr RIMMER, who is a well-known farmer and a member of the local Rural district council, was in  his stackyard according to police advice, guarding his premises, when he saw the figures of two men coming through the darkness from the direction of the train terminus.

When they were in the stackyard there seemed no doubt of their intentions. Mr RIMMER called on them to put their hands up. This they refused to do, and appeared to be searching for the direction from which the voice was coming. Accordingly he fired his shot gun twice at the legs. One of the men fell at the first shot, and after a second shot the other man ran away. He was limping and appeared wounded.

Mr RIMMER rushed forward and assured himself of the submission of this man and gave the alarm.

The police soon arrived and the wounded man was removed in an ambulance to Whiston Hospital, where he was found to be suffering from superficial shot wounds in the left leg between the ankle and the knee.

The man who is, 23 and 6 feet in height, speaks with an Irish accent, refuses to give any information about himself or his movements, but remain silent and nameless. The police are satisfied they will be able to get his name despite his present obstinacy.

It is stated by the police that the fires occurred at points which were close to either railway stations or tram termini.

All the other men who were arrested were found to be in possession either of revolvers and cartridges or life-preservers. One man was found wandering on the shore at Waterloo. He had got separated from eight other men, four of whom had been arrested, and was hoping to wander to safety by walking at the edge of the incoming tide, which washed away his footmarks.

All the arrested men where respectfully dressed and the ages in every case were between 20 and 26.

Tackles man rugby style and took him into custody.

A remarkable story is at hand regarding the capture of two men. I t was noticed that eight men alighted from a Liverpool Tram at Hall Road and proceeded in the direction of the Golf Links, they were then seen to enter a wood, where trace of them was lost. Half an hour later two farm fires broke out nearby. At Crosby a gentleman and his wife and son were passing the railway station on the way to a friend’s house when a man raced past them.

The gentleman, who was formerly a special constable, linking the man’s haste with the fires, gave chase, and tackled him in a rugby style tackle. He refused to give any account of himself, and while everything was going on another man came chasing down. The two men were removed to the railway station and unarmed, both having revolvers in their possession. They were then put in the porter’s room and locked up there while the police were sent for. They were subsequently removed to the police station and detained under, D.O.R.A.